If the presence of robots in our regular life still sounds like a utopia, the possibility of interacting with them on social media is no more a far-fetched idea.
In recent years, KFC, Balmain, Yoox and Renault created virtual avatars to promote their brands. Though such digital influencers might be harmful to the mental health of kids surfing social media or pose a risk to ‘real’ models to lose their jobs, brands are not going to stop leveraging CG-models in their campaigns.

What Are Virtual Influencers?

Digital influencers, digital avatars, or also referred to as CG models, are images created with computer graphics by CG artists and 3D designers. These influencers do not exist in the real world, as you might have guessed, but they do have backgrounds and life they actively show on social media.
Typically, a whole team of designers, artists, and content writers work to represent the life of such an influencer. To make them look, move and sound more realistic and human-like, developers use motion capture. Some of the virtual influencers are actually real human bodies with a CG-made face.
Digital models not just live a life that is often more interesting than ours but ‘take part’ in fashion shows, give concerts, promote brands on social media, and earn real money.
Brud, a Los-Angeles startup is probably one of the most mysterious and famous creators of virtual models. They’ve created Miquela, the most popular digital influencer at the moment. Miquela is naturally not the only creation of Brud. The startup has developed some other digital avatars and managed to drive millions of investments to their company.
Creators of Shudu, ‘first digital supermodel’, have also created the whole model agency TheDiigitals targeted at CGI-models. Virtual models who have contracts with the agency work with Smart, KFC and Dubai Mall.

Top 5 Virtual Models in the World

Lil Miquela is a ‘change-seeking robot’ with over 2 million followers. Miquela was born in 2016 in the U.S. Now she is one of the top digital avatars touting streetwear and luxury brands like Calvin Klein, Prada and Chanel. She is also a singer who has released several singles by now and one of the most influential people on the Internet, according to Times. 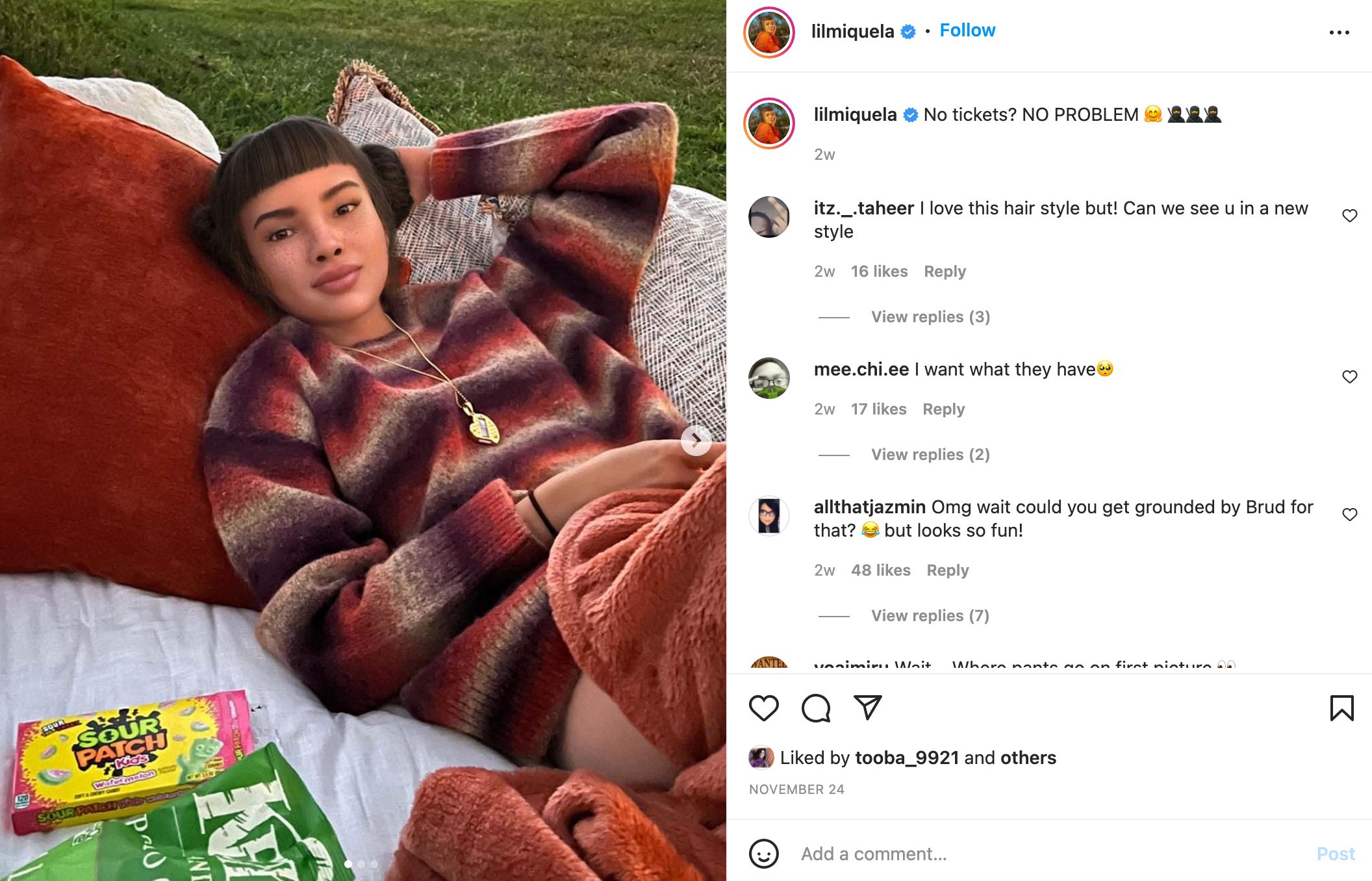 Blawko is also created by the Brud startup. Blawko, like any other CG-avatar, lives his own life on Instagram, plays video games, goes on dates, and promotes brands like Nike, Netflix and DelTaco. Blawko has garnered 156,000 followers on Instagram. 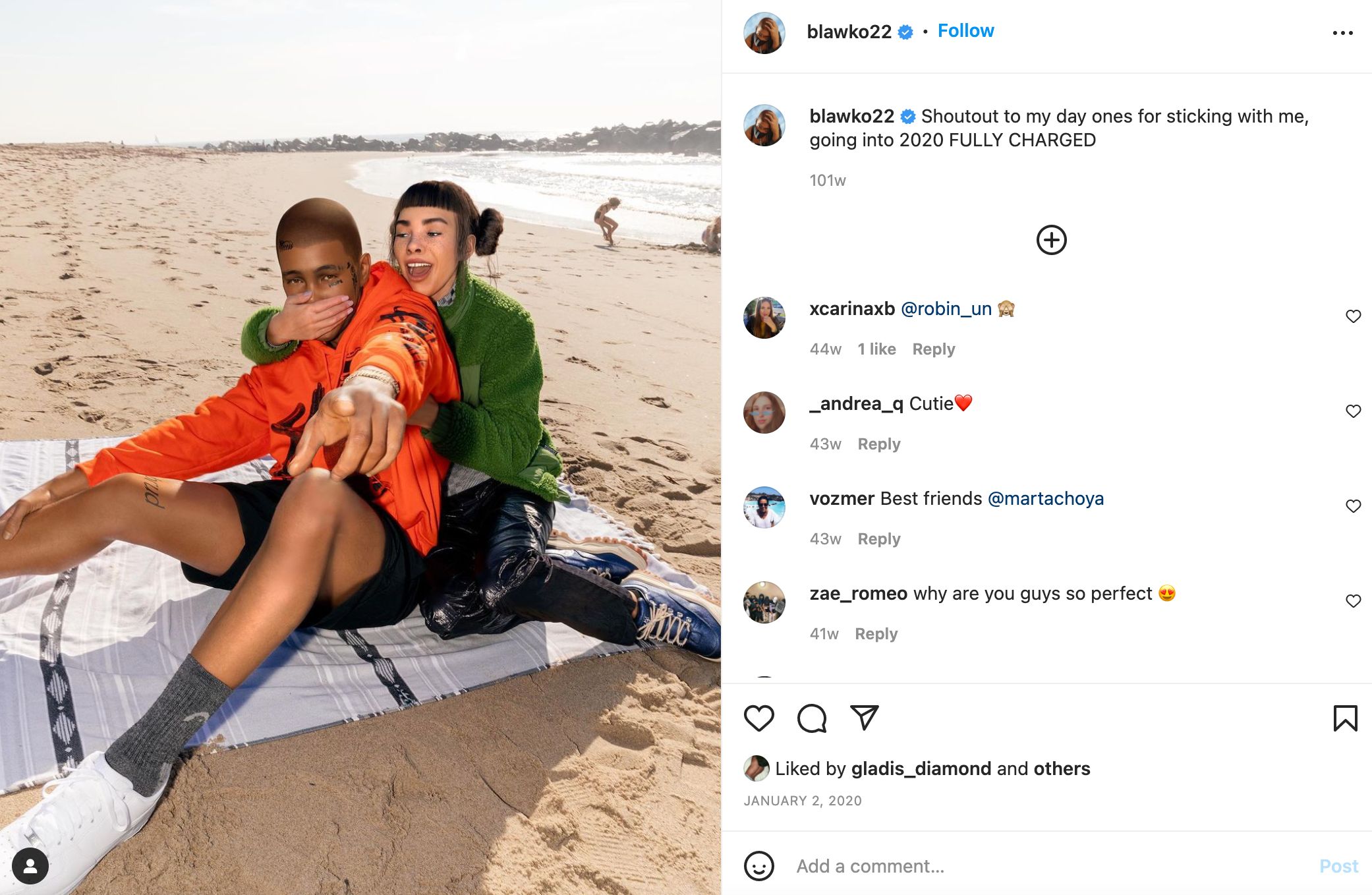 Bermuda is a friend of Miquela and Blawko developed by the same company in Los Angeles. An interesting fact about ‘relationships’ between Miquela and Bermuda is that in 2018, the whole media war started between the two: Bermuda was believed to hack Miquela’s account, deleted all of her posts and replaced them with her own. 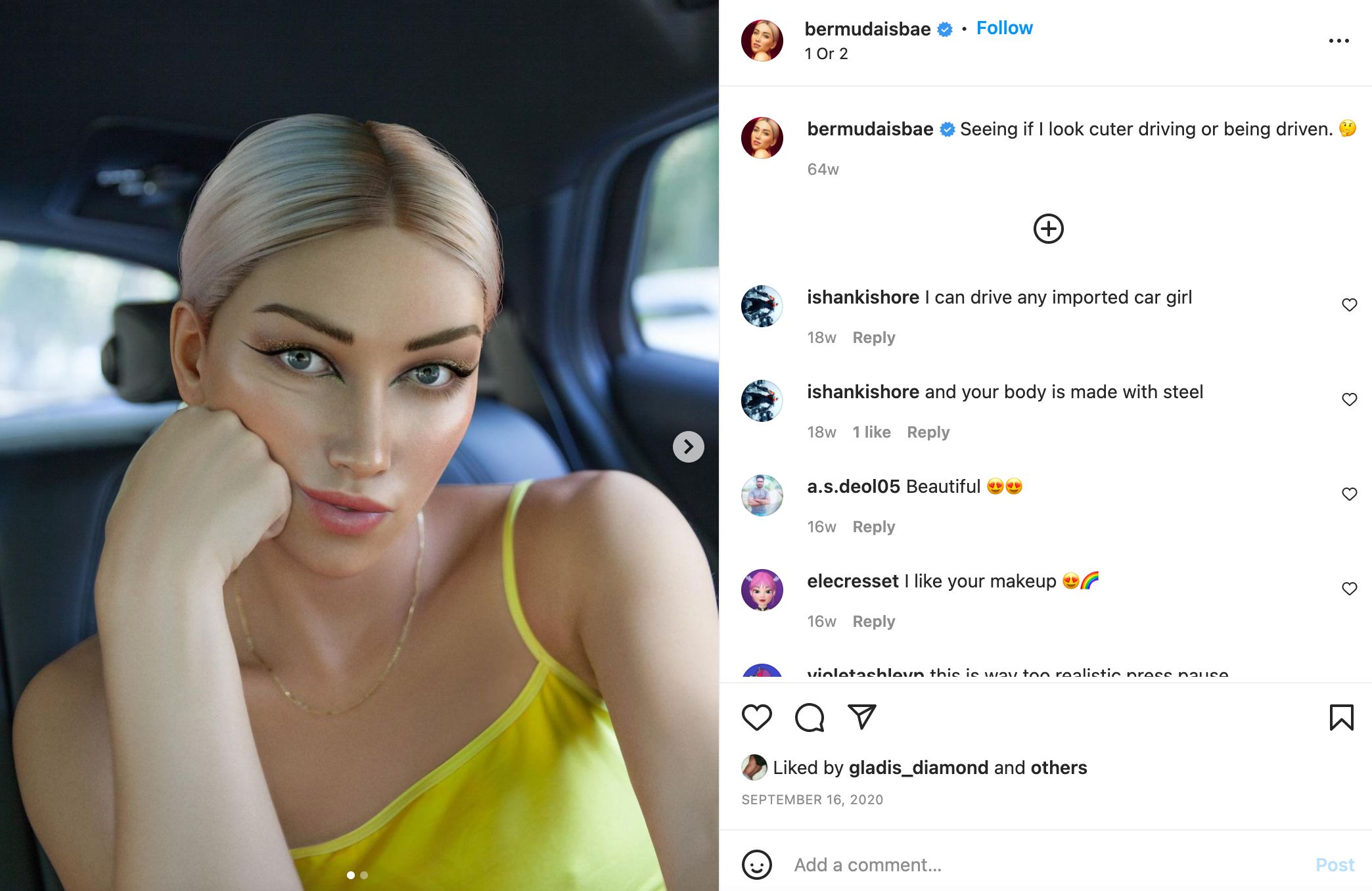 It was an amazing PR trick as it made the social media community believe that two robots were produced by different companies. Now both of the girls have photos and videos with each other.
Shudu claims she is the ‘world’s first digital supermodel’ and has 202,000 followers. She was created by a photographer Cameron-James Wilson who says he has never got any profit from his project and his only goal is to bring diversity into the world of fashion. Shudu is qualified for campaigns of Ellesse and is featured in world-renowned fashion magazines like Vogue. 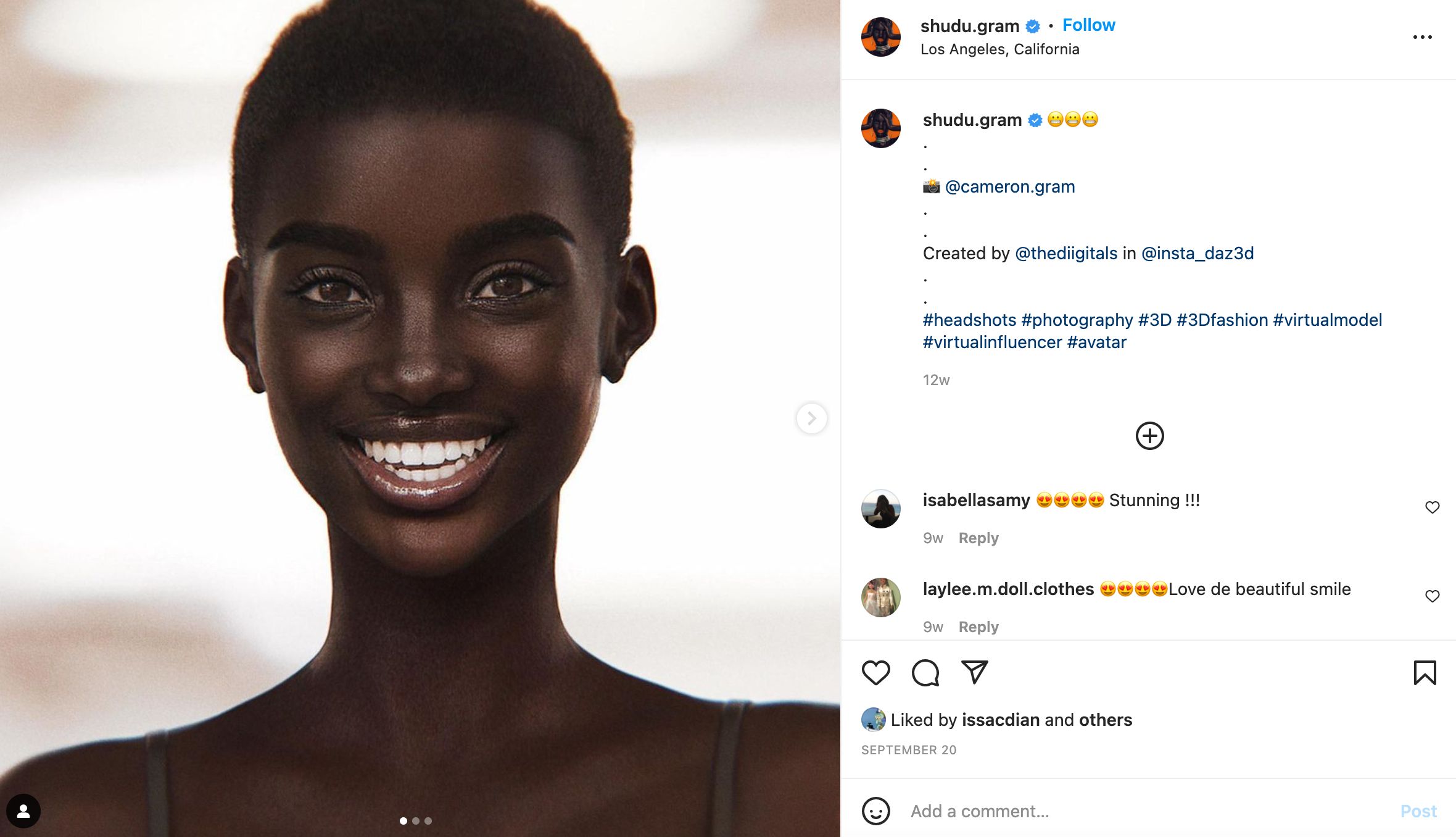 Noonoouri is a 19-year-old digital influencer and activist who works with Dior, Versace, Valentino, Moschino, and others. 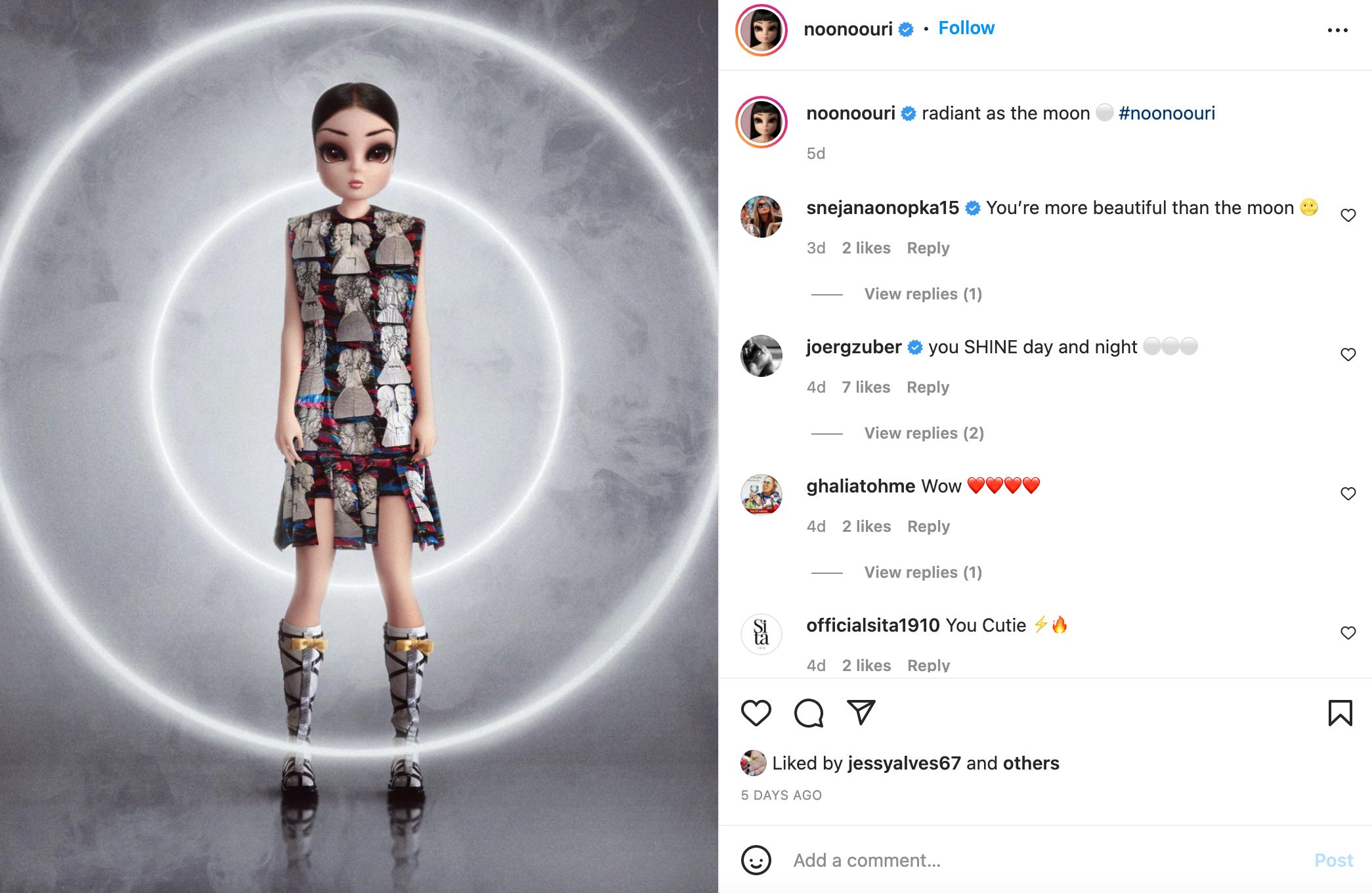 The Pros and Cons of Virtual Influencers as a Marketing Tool

Influencer marketing can be a really actionable tool for brand awareness, bringing traffic to your website, increasing conversions and sales. Yet, as in any other field, working people can go very unexpectedly and in a wrong way, even.
Influencers can take a long time to reply to you or don’t reply at all, set high prices for their campaigns, promote their social media pages not organically but stuff them with bots, and these are just some of the cases you might face after an influencer outreach.
These and some other reasons lead to brands choosing digital influencers. Another reason why is:
Virtual influencers talk about their virtual life. They are extraordinary, to say the least.
As for the audience of digital influencers, the majority of them are Gen Zers, and their ER is three times higher than the one of real bloggers! Geographically, their audience is based in the U.S. at most. Besides, content creation for virtual influencers costs a lot. If a regular Instagram influencer can just post a selfie at no cost, for 3D-Instagrammers and a whole team of artists, it can take lots of investments to create a quality selfie.
Virtual Influencer Marketing: Pros
The biggest pro that brands would love when working with virtual influencers is that they are easier to work with in terms of production: you don’t need to hire makeup artists, rent studios or arrive at Instagrammable locations for a photo shoot.

You don’t need to spend money on flights, worry about deadlines, or think about the people management of ‘real’ influencers.

Another advantage that brands can get from working with virtual influencers is that a brand acquires not only a promotional post or a story but a bursting interest from mass media who are now excited to write about CG-models. Later on, such a positive side-effect will faint, yet, in the beginning, your campaign will surely achieve the desired attention.
Virtual influencers can be at several places without the Time-Turner at the same time and work for different campaigns simultaneously. What human can do that?
With constant technological onrush in mind, marketers can assume that eventually, the production and creation of such influencers will be cheaper and more advanced: AR, AI and neural networks implementation is not far behind.
Virtual Influencer Marketing: Cons
All you need to do is to contact the virtual influencer on social media, and their developers will do the rest. Yet, this might be very expensive to create or tailor a 3D-model to your campaign. As the technology enhances, the price for this will diminish, at the same time, however, interest for virtual influencers will drop, too.
Also, such business deals and collaborations are a financial loss for the government since virtual influencers don’t pay taxes, and their developers often don’t reveal their personalities. Not all of them, though.
Another ethical concern of working with virtual influencers is that they can’t truly experience what people can — they can’t feel the taste of food they promote or feel the fabric of clothes they wear in photos.
So before partnering with a CGI-model, don’t look at their ER alone, think through the whole strategy and decide if you should team up with them at all. If you do, you will at least have a novel experience in social media and influencer marketing.
Who knows, maybe digital influencers will boost sales of your products?
Source