Is there a computer science topic more terrifying than Big O notation? Don’t let the name scare you, Big O notation is not a big deal. It’s very easy to understand and you don’t need to be a math whiz to do so. Big O, Big Omega, or Ω, and Big Theta, or Θ, are notations used to express the computational complexity of an algorithm. In this tutorial, you’ll learn the difference between Big O, Big Omega, and Big Theta notations.

If you’re just joining us, you may want to start at the beginning with What is Big O Notation?.

What is Asymptotic Computational Complexity?

No wonder this stuff is hard to learn.

Let’s break this jargon down.

What is an Asymptote?

Here’s Wikipedia again, telling us that an asymptote of a curve is:

a line such that the distance between the curve and the line approaches zero as one or both of the x or y coordinates tends to infinity.

These definitions make an easy concept harder to understand.

We’re all visual learners, so let’s chart the following equation: 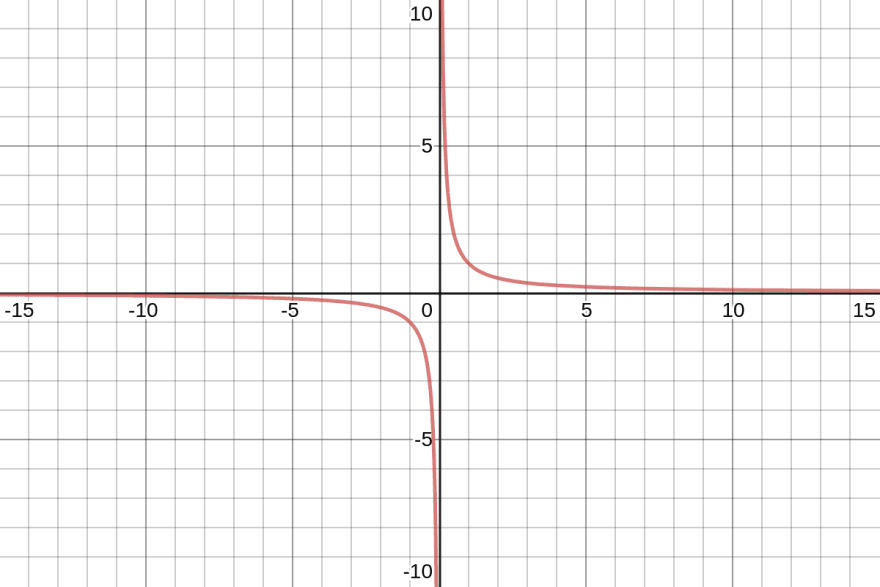 No matter how large (or small) the value of x, our curve will never touch the x or y axes.

Even if that number is Infinity.

Especially if that number is zero.

It’s mathematically impossible to divide by 0.

Division is another way to think about this. How many times can we divide one in half in before we reach zero?

There are infinite divisions!

With each division, our denominator increases by a power of 2.

We will never be able to halve something into nothing.

In the chart above, the x and y axes are the asymptotes of the equation y = 1 / x. But any line can be an asymptote. We’re not limited to horizontal and vertical lines.

What is Asymptotic Analysis?

According to Wikipedia, asymptotic analysis is:

a method of describing limiting behavior.

In mathematics, a limit is the value that a function approaches as the input increases (or decreases).

Sounds a lot like an asymptote. So how do we analyze a function asymptotically?

If our function, f(x) is equal to x^2 + 2x, as x increases in value (and approaches infinity), 2x becomes insignificant compared to x^2.

We then simply say that f(x) is asymptotically equivalent to x^2.

In Introduction to Algorithms, Cormen et al use Insertion Sort as an example to explain the difference between Big O, Big Omega, and Big Theta. We’ll do the same here. Here’s an implementation of Insertion Sort in JavaScript:

And here’s a quick refresher (or explainer) on Insertion Sort:

What is Big O?

Big O describes the upper bound of an algorithm.

Using our Insertion Sort example, the rate of growth of our algorithm is at most quadratic, or O(n^2).

This is why, for us, as developers and practitioners, we are primarily concerned with Big O.

We want to know just how poorly an algorithm might perform.

To say that the Big O of Insertion Sort is O(n^2) doesn’t mean that Insertion Sort will always be O(n^2). The actual runtime will vary based on the input. What we are saying is that, in a worst case scenario, this is the upper bound of the performance of Insertion Sort.

Knowing this, we then need to ask ourselves the following questions:

What is Big Omega?

Big Omega describes the lower bound of an algorithm.

Using our Insertion Sort example, if the input is already sorted, then the rate of growth of our algorithm is at least linear, or Ω(n).

If only life always handed us sorted arrays. 🌼

We can also think of this as our best-case scenario.

What is Big Theta?

Big Theta describes the tight bound of an algorithm, it’s limit from above and below.

Using our Insertion Sort example, we know that the rate of growth is at most O(n^2) and at least Ω(n).

So what use is Big Theta?

Big Theta is often used to describe the average, or expected, case for an algorithm. This isn’t exactly true, but it’s a useful shorthand.

So for Insertion Sort, the average case for Big Theta is n^2.

So What’s the Difference Between Big O, Big Omega, and Big Theta?

We can think of Big O, Big Omega, and Big Theta like conditional operators:

But if we needed to make a blanket statement for all cases, we would use Big O, and, for example, say that Insertion Sort is O(n^2).

Equivalencies are often made between Big O and worst case, Big Omega and best case, and Big Theta and average case, but we can speak of best, worst, and average for each of these notations.

For example, each of the following statements are true:

In this tutorial, you learned the difference between Big O, Big Omega, and Big Theta notations.

Want to stay in the loop? I write a weekly newsletter about programming, problem solving and lifelong learning. Sign up for The Solution