Their Offices in Mariupol and Irpen Were Destroyed by Russians

:::tip
At the beginning of this story, I want to say that I am Ukrainian and I am proud of it. I want to tell one of the thousands of stories of Ukrainian entrepreneurs.

The first office of Kampov Technology, which develops virtual reality projects, opened in Mariupol in 2018. But it was destroyed along with the equipment, as was 99% of all infrastructure in the city. The second office was in Irpen, and it too was destroyed.

\
The team managed to get out of Irpen on foot and miraculously survived, but there is still no contact with the two guys from Mariupol. Now the employees of the company, who left for safety, can and want to work, but they have nothing to use.

They started a business 20 km from the front line

The business began with an idea for a project that future company employees presented at a startup school at Priazovsky State Technical University in Mariupol. The young team was talking about a project that would allow the training of industrial workers using augmented and virtual reality. 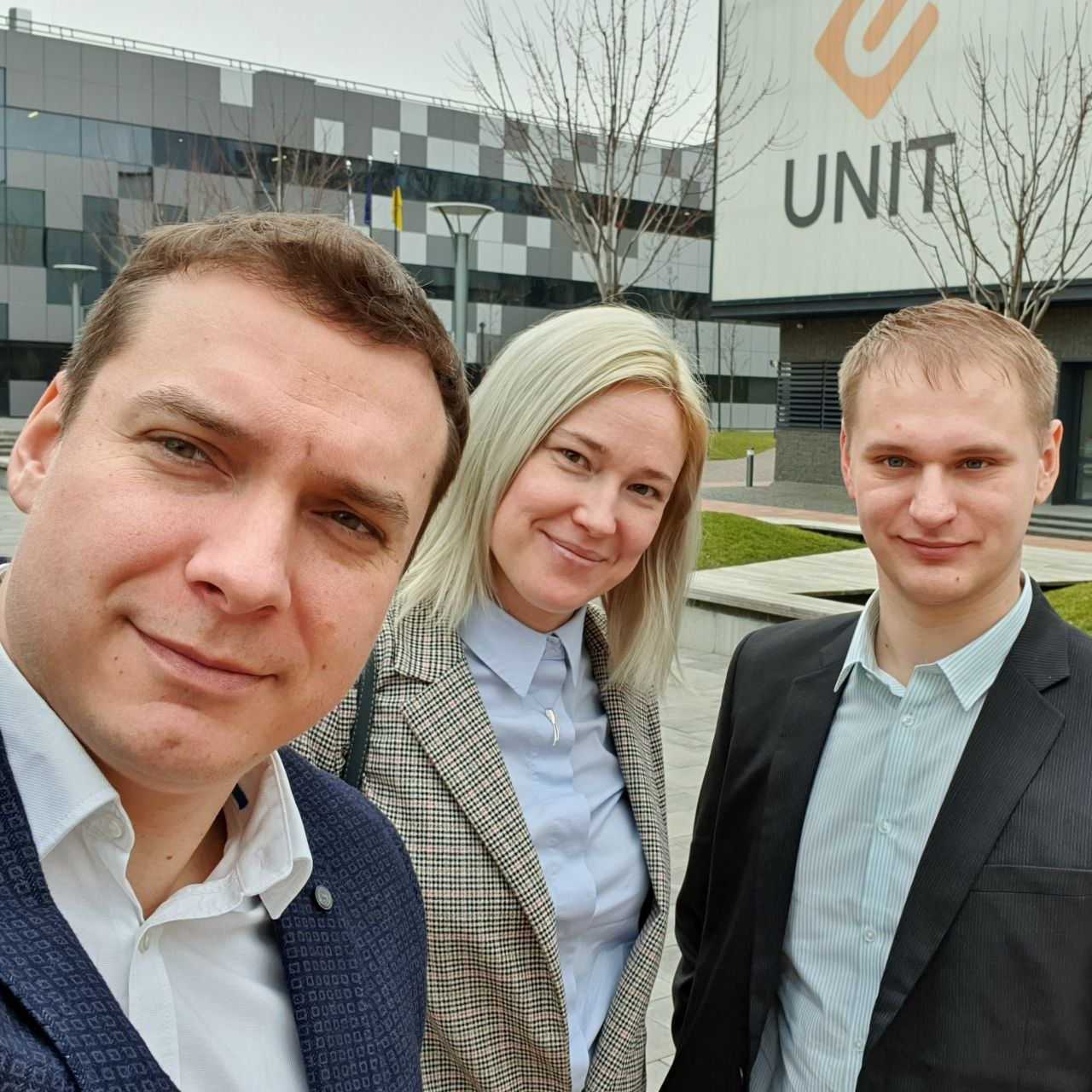 Yury Kampov (now CEO) tried for a long time to find investors for the project. But then Mariupol was 20 kilometers from the front line, so none of the investors he knew wanted to invest.

\
He decided to invest in the idea himself. So, in 2018 Kampov Technology was born in Mariupol. They bought equipment, organized an office in the university, and in 2019 found the first partners and projects.

\
Their company develops training modules for employees of industrial enterprises, educational institutions, and so on. They also worked on thematic VR projects. For example, they created an agricultural fair in virtual reality – a food metaworld with parks, stores, and the ability to buy food.

\
They had huge plans. During this time, they opened one more office in Irpen, where part of the team from Mariupol moved. According to their strategy, they planned to enter the international market this year.

Beginning of the Russo-Ukrainian war

Most Ukrainians didn’t believe in the war. Many Ukrainians said it was big politics and not worth paying attention to. From 2013 to 2018, Yury Kampov lived in Mariupol, so he got used to the constant feeling of tension and the sounds of artillery. And given that the Ukrainian army has made a real breakthrough since 2014, he thought that starting a war was a suicide on russia’s part (after 24th February, we prefer writing from the lower letter). 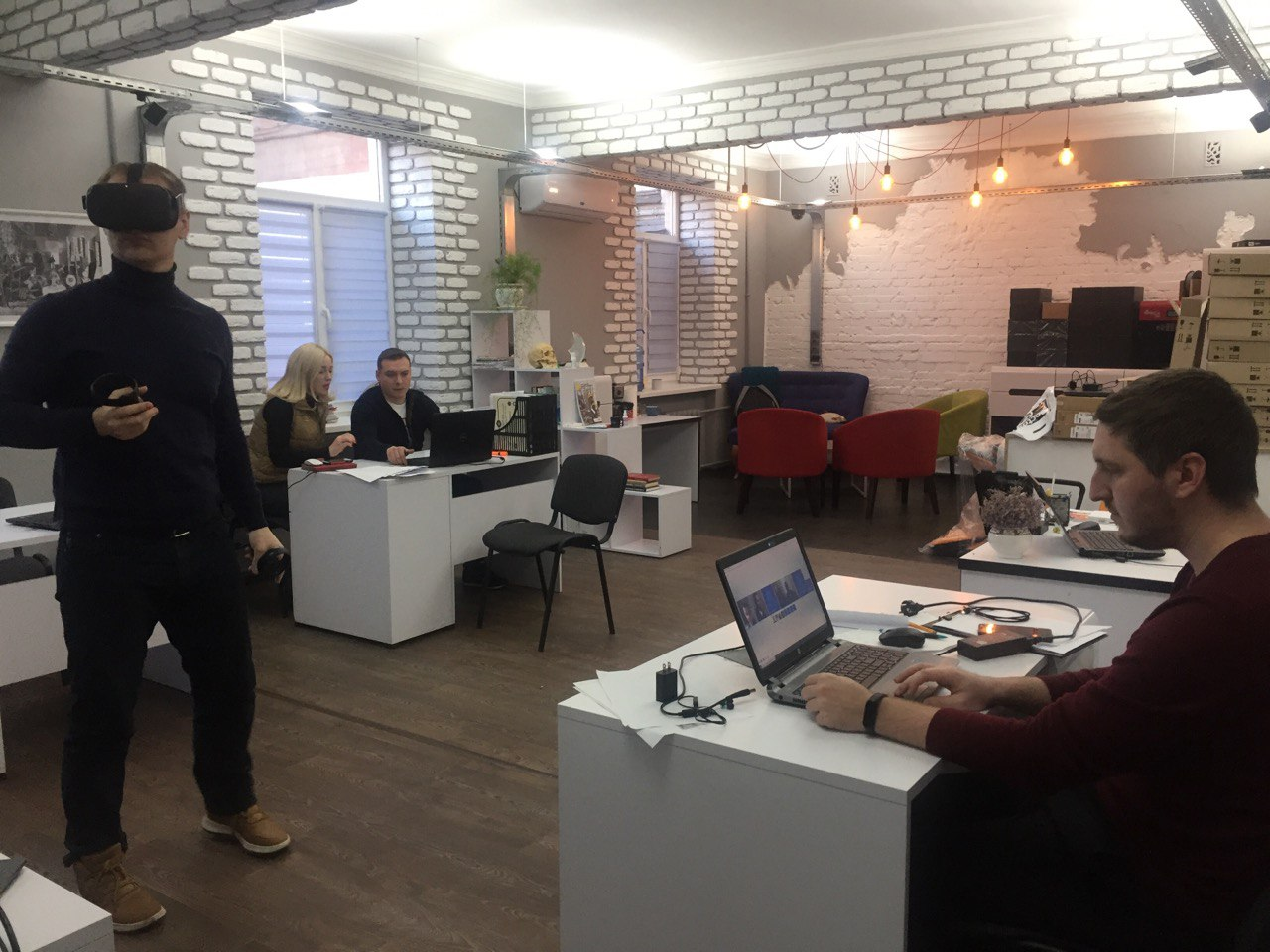 \
On February 23rd, some team members with Yury Kampov came to Kryvyi Rih to meet with potential partners. And on February 24, at 5 a.m. Yury Kampov was awakened by a call from his wife in Kyiv. He heard the phrase: “Yura, we’re being bombed!” It was a real shock. They immediately drove back to Kyiv. They went in silence, occasionally making phone calls to relatives. They listened only to the news on the radio. Everyone understood that the war had begun. And they prayed that they would reach their loved ones in time.

\
During the first days of the war, Yury Kampov suggested to the team to leave for Western Ukraine, but everybody decided to stay. People had relatives and parents. No one was ready to leave them. Yury Kampov understood that if the enemy came to Kyiv, he would take up arms and go to defend his home and country. Even though he had no such experience.

Losing contact with the teams in Mariupol and Irpen 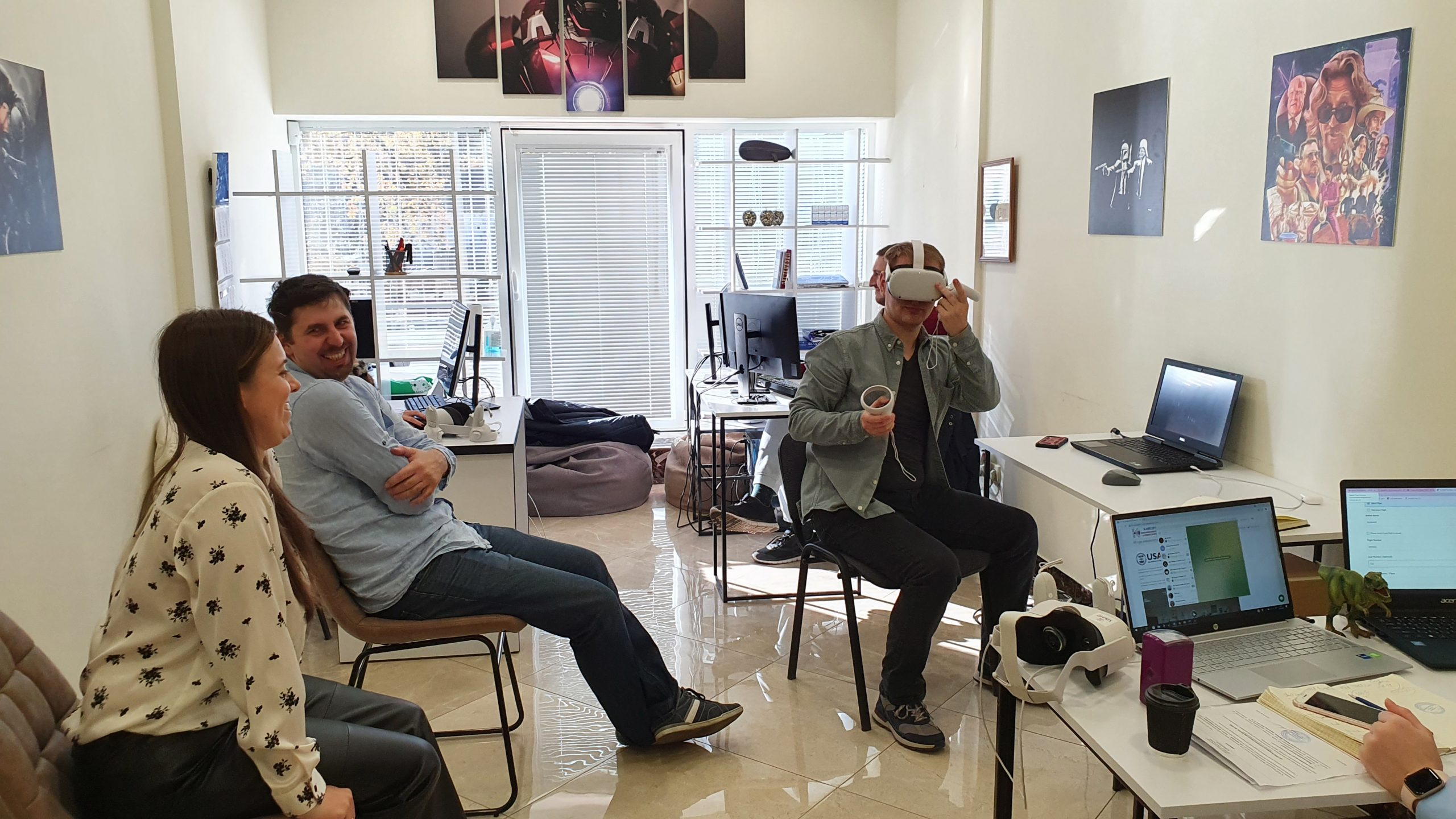 \
Yury Kampov managed to get his family out two hours before russian armored vehicles rolled into Kyiv’s Obolon. The guys in Mariupol were at home with their families. No one understood how the situation would unfold.

\
Part of the team in Irpen also decided to stay home with their loved ones and soon found themselves under occupation. They tried not to leave their cellars for a long time, as there was fighting in the streets, the city was shelled, and a trip for water could have been the last. They all gathered with their loved ones in a private house that had a more or less secure cellar.

\
On March 5, communication with team members from Irpen disappeared. Ten days later, it reappeared – they managed to get out on foot. It isn’t easy to describe what they had to go through. They survived by a miracle.

\
Yury Kampov met them, the guys lived with him for a few days, and then they left – some to Odesa, some to Lutsk, some to Poland. Many of them live with relatives and some rent apartments. The company helps out financially as much as possible. 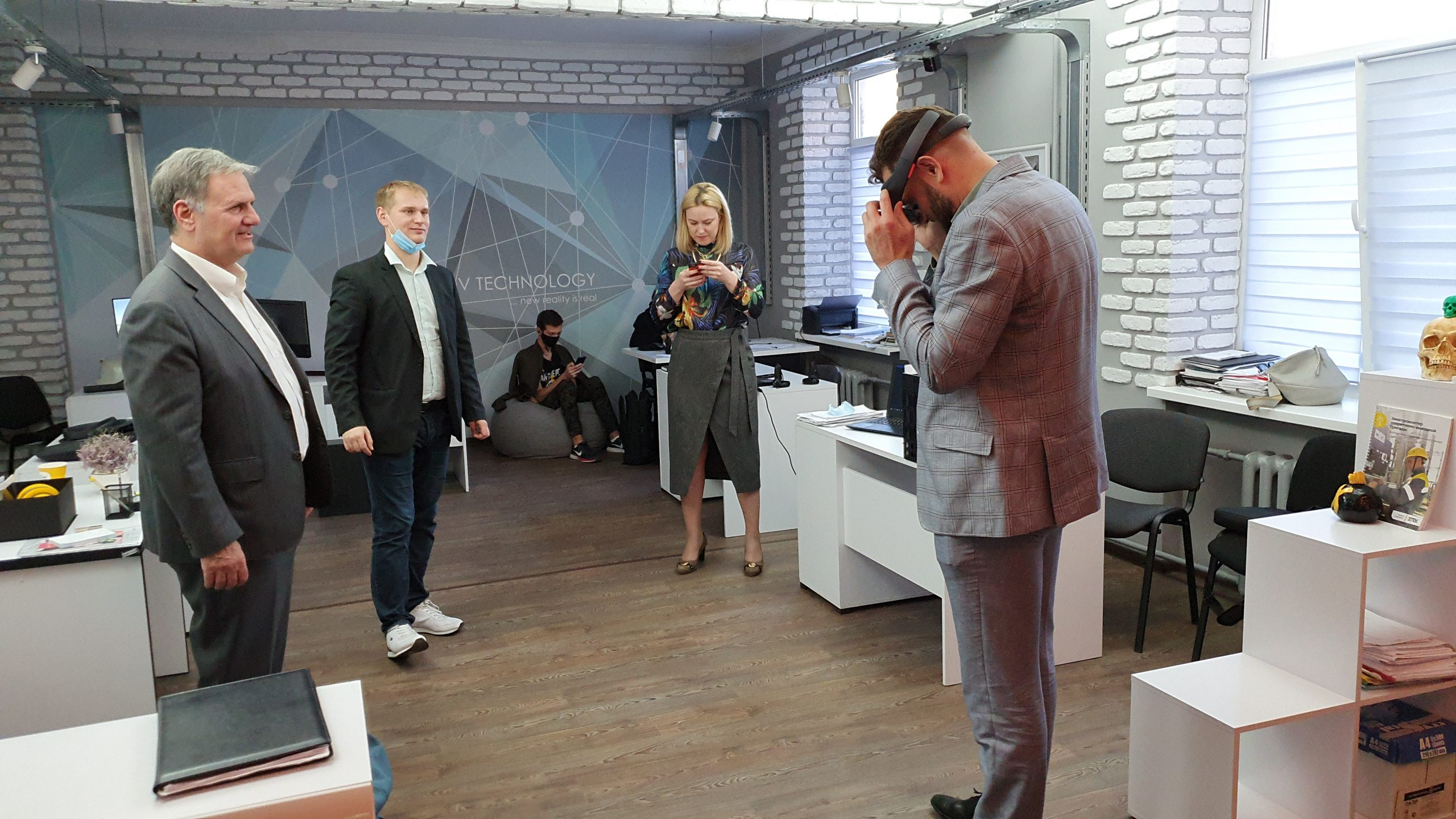 \
About the guys from Mariupol, they were scraping together information. On March 3, they lost contact. They still have no connection with two employees. They do not know what happened to them. Some team members left Mariupol but in different directions. Someone was sent to russia, and the connection with them was cut off there. 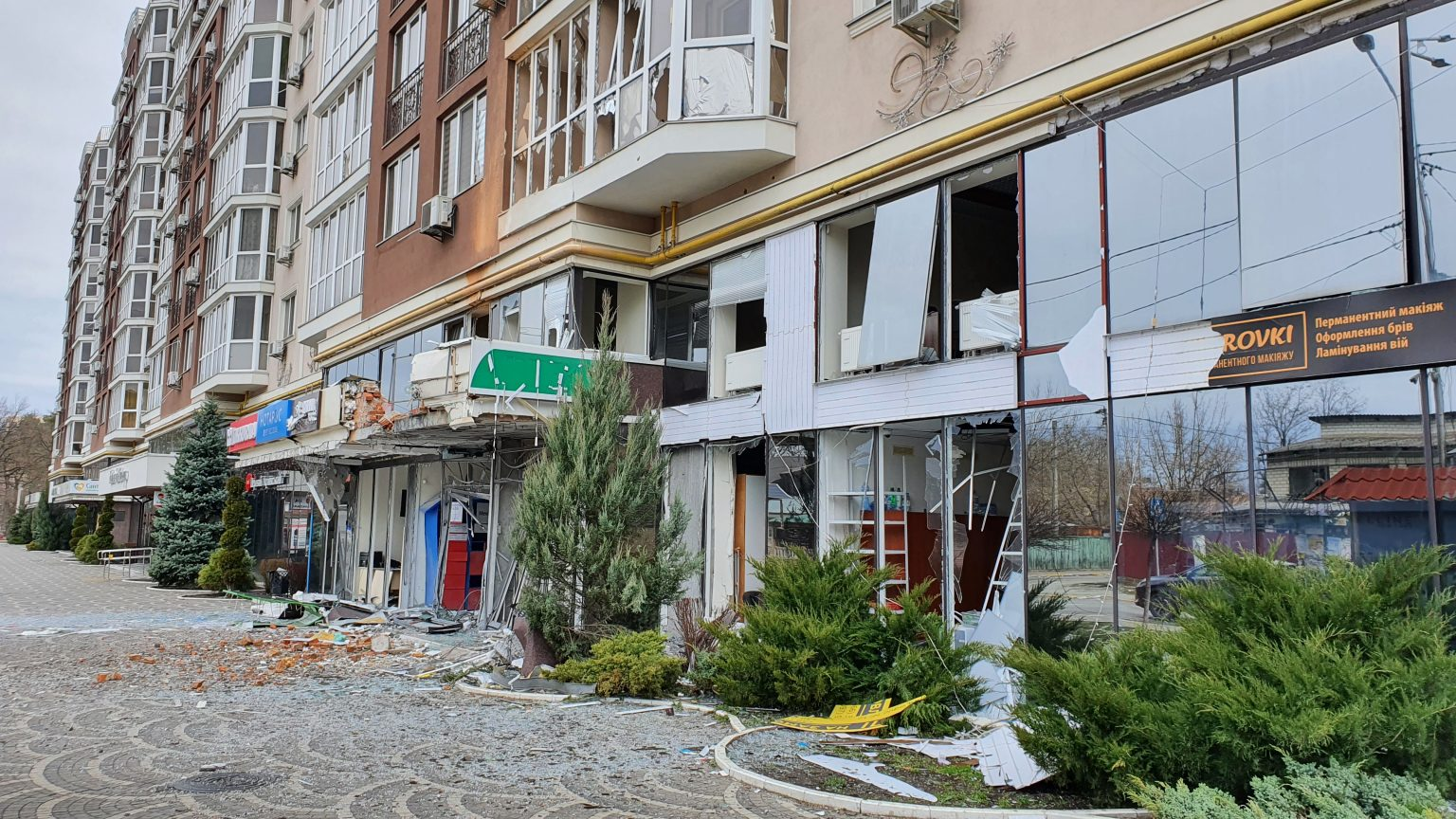 \
When the guys left Irpen, they wondered what to do next. It was impossible to make plans or predict anything when russians bombed Kyiv, and other settlements were being wiped off the face of the earth. But it was necessary to look for a solution. Because there were people for whom the company was responsible, members of their families, and their children.

\
But the guys were left without equipment. From Irpen, they walked, just taking some personal belongings, documents, and things that could fit into a backpack. Technical director Victoria took her two cats. Of course, no one was taking system units, monitors, or virtual reality glasses out of the office. The main goal was to get out alive.

\
After a couple of days, the team decided it couldn’t give up. Everyone invested part of themselves in the company, and Yury Kampov invested all of his money.

\
The Mariupol office with its equipment was destroyed, as was 99% of all infrastructure in the city. The Irpen office was also destroyed. The company`s deputy managed to take some equipment home in Irpen, but russians trashed everything in her house. All that was left of the system units was a shell. They also took out her other equipment and jewelry. They turned everything upside down. 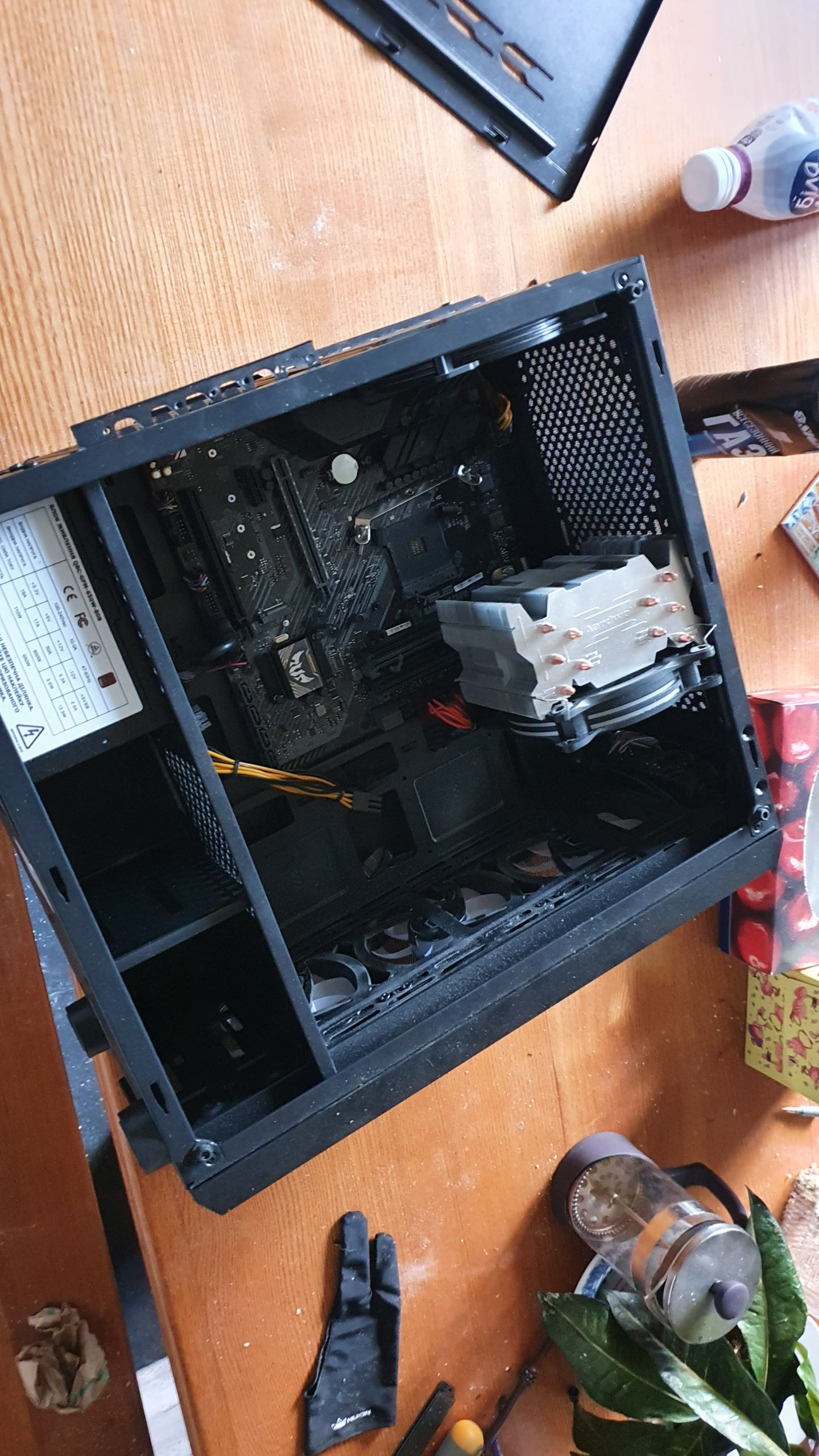 Unfortunately, Yury Kampov no longer has a financial cushion. He has invested all of his spare and personal funds in development and expansion. There is no money left to buy equipment.

\
Yury Kampov wrote letters to European companies and foundations, hoping for financial help and support that they could spend on buying computers. He even wrote to Mark Zuckerberg! But he hasn’t responded.

\
The second challenge are contracts, especially international ones, so the company can start paying salaries. In February and March, they had to sign new contracts. But all their clients have put the work on hold.

\
Kampov Technology will try to renew its operation despite it will be difficult. And this is one of the thousands of stories of Ukrainian entrepreneurs.

:::info
Kampov Technology team is staying in Ukraine. This was decided before the war when they discussed the development strategy. They don’t want to be the company that left Ukraine. They want to be a Ukrainian company for everybody to see that Ukraine develops agrarian and technological. Kampov Technology can and will be a serious competitor to all the other VR developers worldwide.