Photo by Cash Macanaya on Unsplash

\
For years, artificial limbs were merely functional devices — mimicking the human limbs while having a stripped-down functionality. Today, the prostheses industry is becoming much more technologically advanced.

\
Modern prostheses and exoskeletons can be even more effective than actual human limbs. That’s what I call progress.

\
Let’s dive into this today. I will tell you about the latest developments in the field I enjoy and give you some insights from the mechanical engineer’s point of view. At the very end of the article, I will discuss my favorite concept: Helping people with tremors to live their normal lives.

Huge progress has occurred in this field during this time.

\
Versions of the artificial limbs became more ergonomic, the materials used became more lightweight and stern. Some prostheses have built-in computers allowing the tool to control viable parameters and self-adjust to the repetitive patterns of usage. 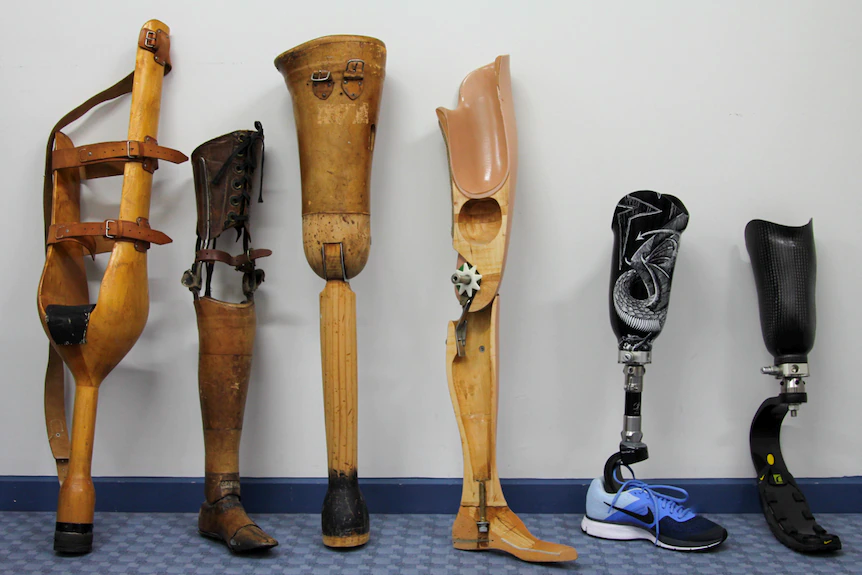 \
\
Most prosthesis companies use the so-called sockets – padded-formed mechanisms attached straight to the limbs. Modern sockets are made of carbon and innovative polymers and are often used in combination with vacuum suspension. Because of the suction created between the prosthesis and the limb, an artificial limb does not detach while being used.

\
Before the invention of such a mechanism, leather straps were used for the same purpose. They were uncomfortable to wear, required replacement quite often, and were ruined by external factors. Modern prostheses have a certain degree of water resistance allowing them to be used during rain and snow with no risk.

Aside from the ones available to use during the rain and snow, there are waterproof prostheses allowing people who use them to swim freely everywhere and take showers without taking the prosthesis off. 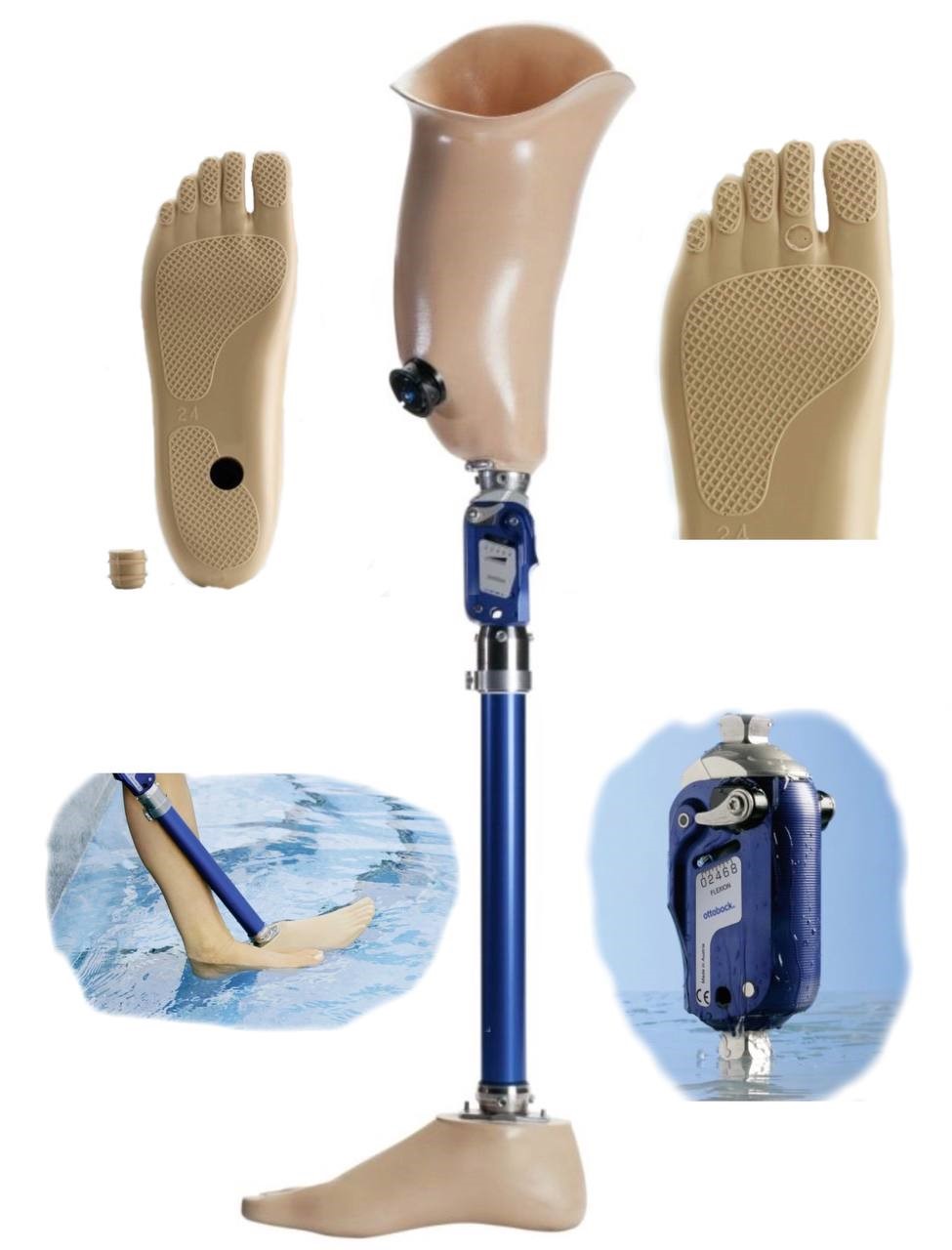 \
This prosthetic device looks simple yet it is innovative. Here are a couple of things I like about this device as a mechanical engineer:

Aside from being water-resistant, some knees from Ottobock are computer-controlled. I am fascinated by microprocessor knees, as they provide a person wearing them with a wide range of possibilities.

\
Let me tell you a bit about how they work. The built-in computer controls the level of fluid inside of the knee. The fluid can be pneumatic or hydraulic. A series of sensors monitor each phase of your gait cycle and the computed adjusts the resistance of a prosthesis. That’s why a person can walk more efficiently on different speed regimens and be safer on stairs and ramps.

\
What I love about microprocessor knees:

\
Microprocessor knees are quite expensive in comparison with mechanical ones. However, they have pros on health and can be used in many situations with no limitations. So for someone having a good insurance plan, these systems can be a good option.

Where the Modern Exoskeletons are Used?

What do you imagine while hearing the word “exoskeleton?”

\
Probably, something monster-like from a cartoon, a tremendous construction allowing one to be invincible and destroy everything. 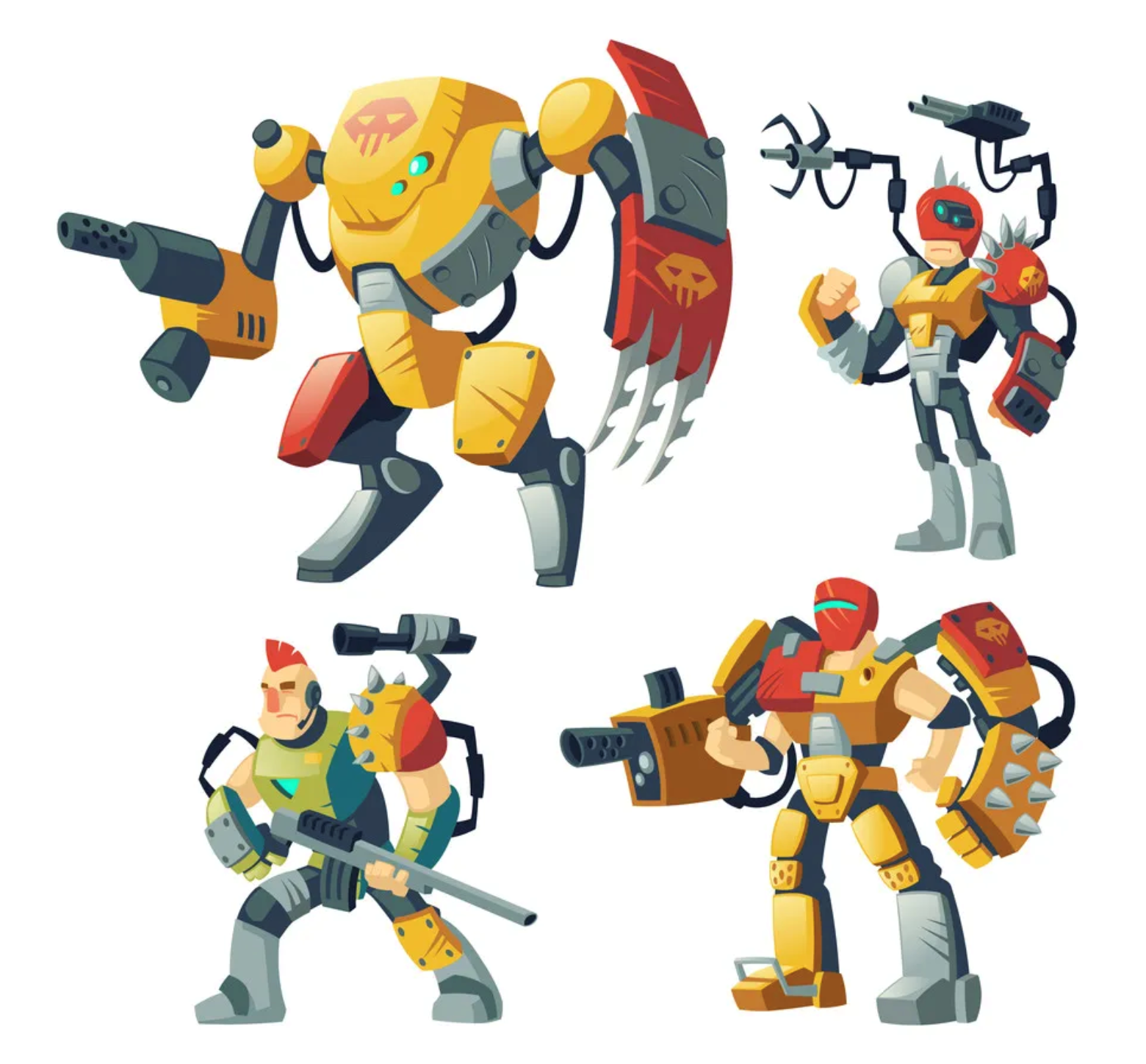 Real-life exoskeletons won’t give you the ultimate power and won’t turn you into a cartoon-like robot. However, they can get rid of your back pain, and give you extra power while doing some daily and work tasks.

\
The fields of work mentioned above are related to the high risk of spine trauma which leads to enormous recovery and even legal costs spent by the employer. Exoskeleton usage helps the employer to stay away from the force-majeure and keep the working environment safe.

\
Exoskeletons limit the impact of high-risk postures and heavyweights on the spine. They allow workers to lift heavy weights without the risks of trauma.

\
Modern exoskeletons are computer-driven. They are self-adjustable and self-optimizable. They maintain the person’s mobility and help one to move with confidence and no risk. 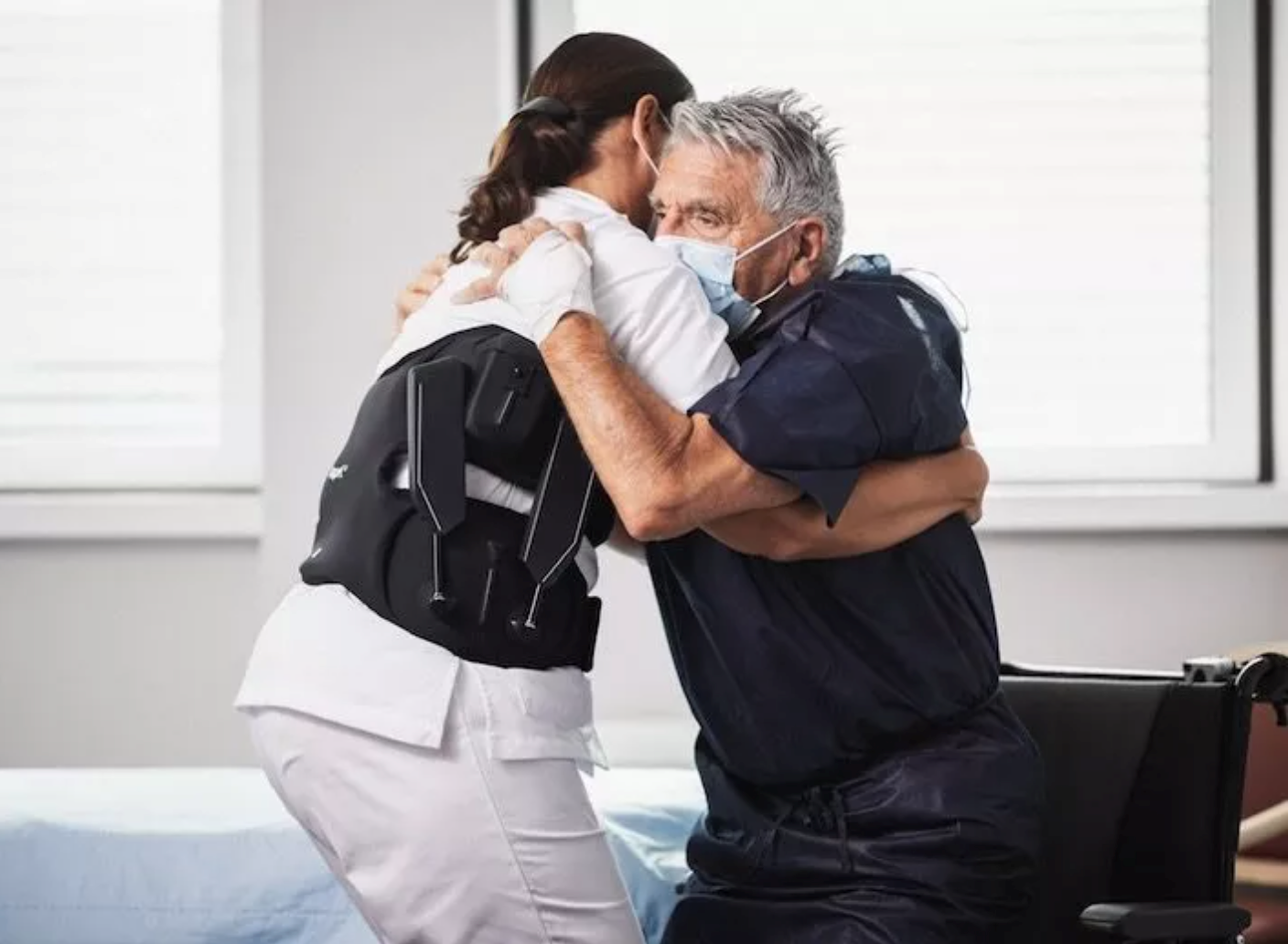 \
Speaking of the healthcare industry, an exoskeleton can provide a caregiver with protection from traumas related to awkward postures and repetitive body moves. It will also add some to the strength of a person allowing one to handle heavy people and equipment with ease.

\
From the engineering point of view, exoskeletons are similar to prostheses. They both are made of carbon and high-class polymers, are waterproof and some models have built-in computers.

\
However, exoskeletons are generally simpler than prostheses as they don’t need to be a perfect substantiation to the absent limb. They help the spine to do what it already does better, but an exoskeleton is not a substance to the spine for now.

An Exoskeleton Helping People With Tremor to Live a Normal Life

\
In 2007 a group of scientists introduced a concept of an exoskeleton that will help people with tremors to live a normal life. The concept’s name is WOTAS and can be explained as wearable orthosis for tremor assessment and suppression.

\
Unfortunately, for now, this is still a concept, but I love the way it can help people that’s why I will introduce it to you in brief.

\
The WOTAS support structure is slightly different from the support structure of the other exoskeletons. It implies not strengthening the limb, but on fixating it, not allowing even the strongest tremor to change the limb’s position.

\
For the support elements between the orthotic device and the human arms, scientists have chosen thermoplastic as the material. This material allows supports to adapt to the morphology of each user’s arm.

\
To align the exoskeleton perfectly, each support has at least 3 contact points per segment and velcro straps are fixed to the fabric to tighten the support to an arm. The fixation of the wrist is mainly on the inner side of the wrist while the wrist controller is fixed on the opposite side of one.

\
The hand fixation is similar to wrist fixation. To compress the soft tissues and boost the performance of the fixation supports, the textile substrate is used. 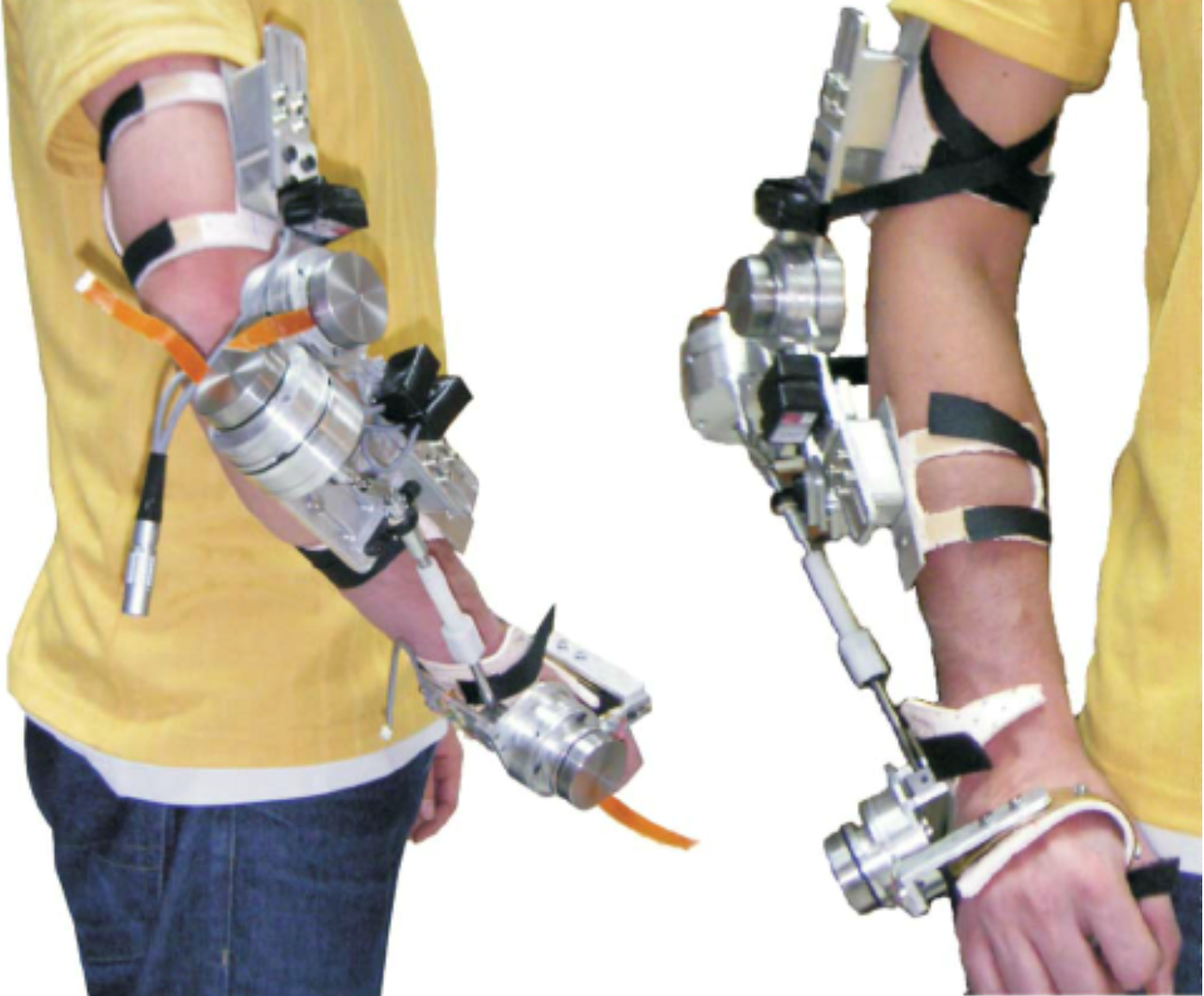 \
The built-in sensors allow WOTAS to track the tremor and hold the limbs still while allowing a user to do what one needs with the help of that limb. The following sensors are used to maintain this functionality: gyroscopes, accelerometers, and goniometry ones. This combination allows the tool to work in every position of the body.

\
However, WOTAS has some downsides, not allowing it to become an actual exoskeleton helping people to handle their tremors.

\
Despite the fact it can reduce tremors on up to 80% ratio, the construction is bulky and heavy. It does not allow people to use this tool daily. The size of this exoskeleton can cause unwanted social exclusion. Most of the users want their exoskeleton to be hidden under their clothing. And this issue is the one we are only about to solve for now.

Exoskeletons and prostheses have changed in many ways during the last 50 years. New materials and computer possibilities opened up the gates for many wonderful possibilities.

\
And if you have some concept in mind, don’t hesitate – promote it! You can be the one who changed the world for many people. I will keep you up to date regarding the latest inventions and technologies that can change the world. To get in touch with me, find me on social media and stay tuned!