The Human Side of Animals by Royal Dixon is part of HackerNoon’s Book Blog Post series. You can jump to any chapter in this book here: [LINK TO TABLE OF LINK]. Chapter III: Animals at play

"… About them frisking, played
All beasts of the earth, since wild, and of all chase
In wood or wilderness, forest or den;
Sporting the lion romped, and in his paw
Dandled the kid; bears, tigers, ounces, pards,
Gambled before them; the unwieldy elephant,
To make them mirth, used all his might, and wreathed
His light proboscis."
—Paradise Lost.
That "one touch of Nature makes the whole world kin" is shown in no clearer way than by the games and play of animals. Recreation is as common among them as it is among our own children; and they seem always to be artistic and even skilled in their play. Young goats and lambs skip, jump, run races, throw flips in the air, and gambol; calves have interesting frolics; young colts and mules have biting and kicking games; bears wrestle and tumble; puppies delight in biting and tussling; while kittens chase everything from spools of thread to their own tails.
But animal children grow up, and stop playing to a certain extent as age advances, precisely as human children do. Each settles down into a more practical condition of life. They dislike to have their games and play disturbed, and if the mother dog growls because her playful son has continuously tumbled over her while she was sleeping, or the cat-mother slaps her kitten because he plays with her tail—it is a display of the same kind of emotion that prompts a human mother to rebuke her child in the nursery for making too much noise, or for throwing toys out of the window. Animals, like ourselves, feel every sensation of joy, happiness, surprise, disappointment, love, hope, ambition, and through their youthful games an entire index of their future lives may be obtained.
This play has much to do with the physical and mental development of the animals; and it is strange indeed that so few writers have considered the subject of play in the animal world. Most of those who have noticed the subject at all, drop it with a few remarks, to the effect that it is "highly amusing," or "very funny," or "unbelievable," or "so like the play of children," without even a word of explanation of the whys and wherefores of it.
All animals have some kinds of play. Plutarch speaks of a trained elephant that often practised her steps when she thought no one was looking. No one who has ever visited a zoological park and seen the crowded monkey and baboon cages can have failed to note the wonderful play of these animals. Seals seem never to tire of chasing one another through the water; while even the clumsy hippopotamuses have diving games.
Kittens begin to tumble and play before they are two weeks old. They will roll and toss a ball, hunting it from the dark corners, lay in silent wait for each other, and suddenly spring upon an unsuspecting fellow-cat-baby's back, just as they will do later in life, when seeking their prey. I have seen them play with a catnip mouse for hours at a time, just as the mother cat plays with a real mouse.
Brehm says that this is noticed in their earliest kittenhood, and that the mother cat encourages it in all ways possible, even to becoming a child with her children from love of them, as a human mother does in the nursery with her child. The mother cat begins the play by slowly moving her tail. Gesner considered her tail as the indicator of her moods. The kittens, while they may not understand what this means, are greatly excited by the movement, their eyes sparkle, their ears stand erect, and slowly one after another clutches after the moving tail. Suddenly, one springs over the mother's back, another grabs at her feet, while a third playfully slaps her in the face with his tiny, soft, cushioned paw. She, patiently and mother-like, lovingly submits to all this treatment, as it is only play. 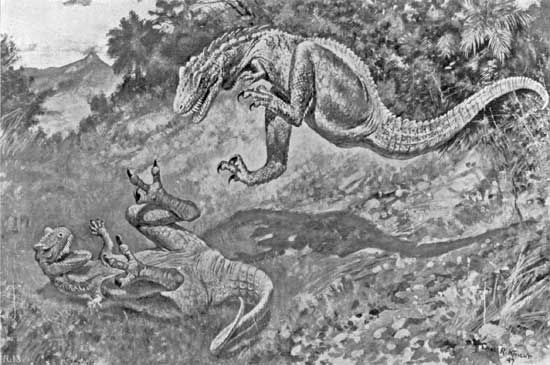 DRYPTOSAURUS. THE PREHISTORIC ANIMALS, TOO, UNDOUBTEDLY HAD THEIR PLAY TIME, WITH GAMES AND "SETTING UP" EXERCISES. 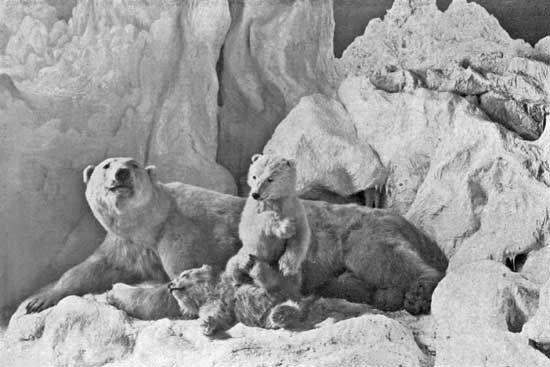 A HAPPY FAMILY OF POLAR BEARS. THE YOUNG CUBS WRESTLE AND TUMBLE, AS PLAYFULLY AS TWO PUPPIES. THIS PLAY HAS MUCH TO DO WITH THEIR PHYSICAL AND MENTAL DEVELOPMENT.

Many scientists have claimed that this so-called instinct should not be classed as real play. However, such an authority as Darwin thought it was play, and Scheitlin said that the cat let the mouse loose many times in order that she might have the experience of catching it each time. No mercy is shown the helpless mouse, which is the same to her as the toy ball—in the same way as a real beetle and a toy beetle are the same to a small child. Evidently the cat does not play with the mouse for the delight in torturing it, but purely for practice that she may become skilled in the art of catching it. The cat also exercises in springing movements, and by studying the mouse's probable movements, learns to acquire a knowledge and skill in mouse-ways otherwise impossible.
The same cruel practice is found among leopards, panthers, and wild cats. Brehm verifies the observation that many members of the cat family practise torturing their victims in a horrible manner, pretending to liberate them, until the poor creatures at last die from their wounds. Lenz tells of a marten that would play with its prey for hours when not hungry. Especially was this true when marmots chanced to be his victims, and around these he would leap and spring, dealing them terrific blows first with one paw and then with the other. When hungry, however, he proceeded differently, devouring them at once from teeth to tail.
All the cat family, it seems, are fond of human companionship, and take almost as much delight in playing with human beings as with their own kind. This is especially true of the puma. Brehm tells of a tame one that delighted in hiding at the approach of his master and springing out unexpectedly, just as the lion does. Hudson claimed that the puma, with the exception of the monkey, was possibly the most playful of all animals. Travellers tell many interesting tales of the play of these animals, especially on the Pampas of South America.
Gross relates the experience of an Englishman who was compelled to spend the night outdoors on the Pampas of the La Plata. At about nine o'clock, on a bright moonlight night, he saw four pumas coming toward him, two adult animals and two young ones. He well knew that these animals would not attack him, so he quietly waited. In a short time they approached him, chasing one another and playing hide-and-seek like little kittens; and finally leaped directly over the man several times. The mother cat would run ahead, calling to the little ones to follow her. But she never disturbed him.
At times an animal at play with another uses the same tactics and methods employed on its prey. Of course, the value of such practice for the tasks of later-life is evident. Dogs play hide-and-seek, tag, and various chasing games for hours without resting. Among the negroes of the South it is not uncommon to see a hound playing hide-and-seek with the little pickaninnies. I have seen a hound peeping in and out among a pile of brush to discover where the little ones were hiding, and at the first sight of a little black face, he would lay low in anticipation of a playful spring, or a sudden dash-away, with the expectation of being chased by his friends. At times he would suddenly disappear toward his home, and slyly slip around and approach the playground from an opposite direction.
Every one who has owned fox terriers knows how they will crouch in the open grass and remain motionless, with quivering expectation for the other playfellow to arrive, and when the one in ambush sees the other coming he springs toward him, as though he were going to destroy him! And when the two come together, they attempt to seize each other by the necks, as they would do in a real conflict. A wrestle and tussle ensues and when utterly exhausted from this play, the tired dogs, like two fatigued children, run to their homes.
Dogs are fond of playing ball, and will readily bring a ball or stick to their master when he has thrown it. They will also go into the water to bring out sticks that may have been tossed in for amusement. Eugene Zimmerman had a young fox terrier that would set a ball in motion, when there was no one to pitch it for him, by seizing it in his mouth and tossing it up in the air. Monkeys and jaguars will also play ball, and tame bears take great delight in wrestling, playing ball, and fighting mock battles. 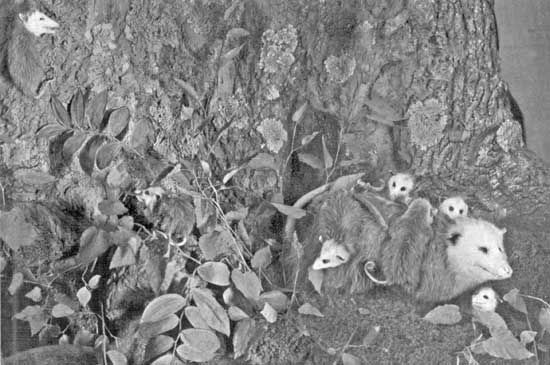 THE MOTHER OPOSSUM IS NEVER HAPPIER THAN WHEN SHE HAS HER LITTLE ONES PLAYING HIDE-AND-SEEK OVER HER BACK. 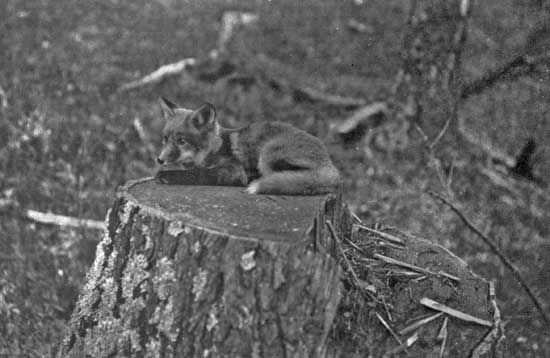