HackerNoon has introduced many new great features, options, and improvements. One of them is ‘Notifications.’

\
It turns out that these notifications aren’t only supposed to keep you up-to-date with all things related to your new stories, but also to remind you about your old stories. That’s how I got this nostalgia notification.

You have probably heard stories about actors who don’t like to watch their own old movies. I don’t like to read my old stories either. But, this one was different.

\
So, what am I doing right now? Am I revisiting or updating “A Requiem for John David McAfee?” I think, a little bit of both.

One Year Later – Why Does It Still Matter?

The last couple of years, especially the last one, were… Yeah, it’s not easy to come up with the right word(s). We have been totally numbed, haven’t we? Nothing and no one can’t surprise or shock us anymore. How long did the news about John McAfee’s death occupy your thoughts? Long enough to remind us about his controversies, and not long enough to remember his achievements.

To this day, as Reuters reports, McAfee’s remains are still in a Spanish morgue…

\
So, how do you feel about this legal “technicality?” 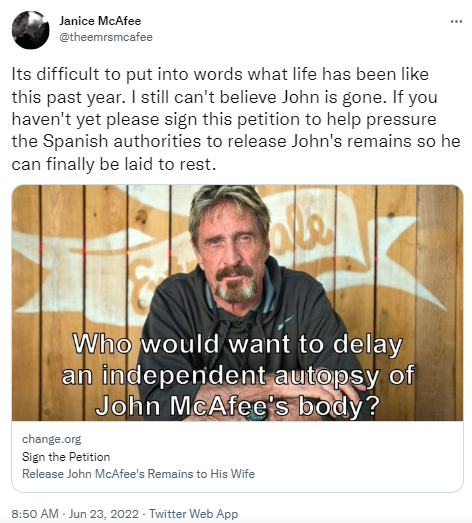 I’m not interested in (conspiracy) theories about the circumstances of his death. With all due respect to the US legal system, I think that allowing the person, any person, to rest in peace is more important than the legal charges and proceedings.

\
Benjamin Franklin famously said that “nothing is certain except death and taxes.” Infamously, John McAfee meets both “requirements.” So, “can he finally be laid to rest,” as his widow asks?

“The World Is A Much Darker Place Without Him” 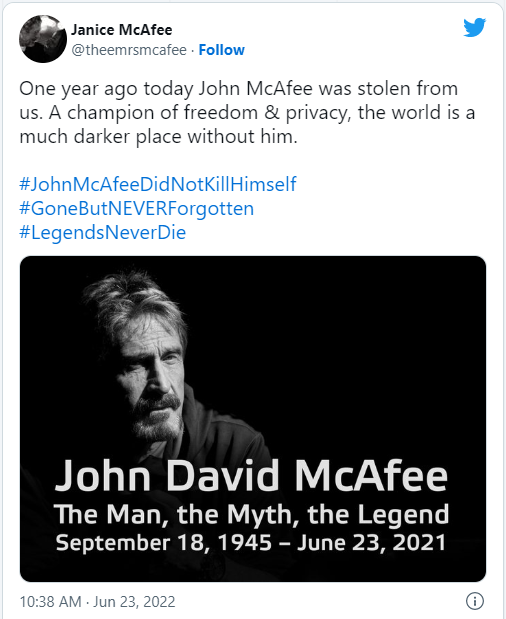 I agree. Our world hasn’t become only much darker, but also more dangerous to the point when “cyber bombs” have become deadlier and scarier than the “traditional” nukes.

\
The man who used to work at NASA on the Apollo program was the first to fight against cyber threats when we didn’t even know how to call them, let alone how to prevent and eliminate them:

\
“When I first read about the Pakistani Brain virus, I’d never heard of a virus before, neither had anyone in technology. It fascinated me.” (from McAfee’s interview with the BBC in 2013)

\
The machines are perfect, but still vulnerable. The people are imperfect, and unforgiving. We find it hard to separate someone’s imperfections from accomplishments.

\
I watched the documentary, but I haven’t read the book about John McAfee. The rights to the book have already been acquired by AMDC Films. I don’t need either to tell me that McAfee was complicated and brilliant, controversial and intriguing. What kind of a person do you have to be to create a computer virus, exploit it, and eventually live with what you did? And, what kind of mindset do you have to have, so you can come up with an efficient and affordable antivirus solution? An unusual one, that’s for sure.