More than a century ago, the French colonialists decided to modernize the French Indochina, especially its capital, Hanoi. Large areas of Hanoi were cleared to accommodate French-style districts with boulevards, bridges, palaces, villas and gardens. This major infrastructure project was supposed to transform Hanoi from a cramped and narrow city into a symbol of France’s “civilising” mission in Indochina.
A sign of cleanliness and civilization was the installation of toilets in these new buildings. And with toilets is where the story truly begins. The sewer network built by colonialists became a rats’ paradise, as there were no predators. Also, rats could easily invade the luxurious residences through the subterranean highway when they got hungry. This caused massive concerns for the French as just a few years earlier, in 1894, Alexandre Yersin discovered the link between rats and the bubonic plague. Something had to be done.
Municipal rat hunters were employed, and although they killed thousands of rats daily, the rat population didn’t seem to shrink. So, the French administration decided to implement a bonus program for the general public, depending on how many rats each person killed. As the government didn’t want to take care of eliminating the corpses of the rodents, they asked the hunters to provide only the tail of the killed rat as proof. The program seemed to be a success. Until rats without tails were spotted through Hanoi. It turns out that the rat catchers only cut off the rats’ tails and then let them go so they can reproduce and generate more profits. Some even bred rats for the sole purpose of cutting their tails and taking the reward. After all, obtaining a homegrown rat’s tail was much safer and easier than going on a hunt in the sewers.
In the end, the French government abolished the program, but it was too late. An epidemic of bubonic plague broke out in the city, causing almost three hundred deaths.
Then we have the cobras in colonial India. As cobras caused many deaths, the British government implemented a bounty program for dead cobras. Locals started breeding cobras to kill them and get the money. When the authorities realised this, they stopped the program. The cobra farms closed, and the farmers released the cobras into the wild, exponentially increasing the cobra population and, consequently, the deaths they caused.
Although the rat massacre was documented by historian Michael Vann, who published a graphic novel about it, The Great Hanoi Rat Hunt, the cobra story doesn’t seem much more than an anecdote. Still, economist Horst Siebert used the cobra narrative to coin “the Cobra Effect” (perhaps it should have been named “the Rat Effect” for a more accurate historical representation), an example of perverse incentives. Perverse incentives reward people for making an issue worse.
The Cobra Effect is also a variation of Goodhart’s Law (adversarial Goodhart): “When a measure becomes a target, it ceases to be a good measure.”
Consider how software applications would perform if software developers were paid for the number of lines of code they wrote daily. When measures are set from an ivory tower, people often gamify the rules to reach that specific objective.

Once upon a time, there was a factory in the Soviet Union that made nails. Unfortunately, Moscow set quotas on their nail production, and they began working to meet the quotas as described, rather than doing anything useful. When they set quotas by quantity, they churned out hundreds of thousands of tiny, useless nails. When Moscow realized this was not useful and set a quota by weight instead, they started building big, heavy railroad spike-type nails that weighed a pound each. 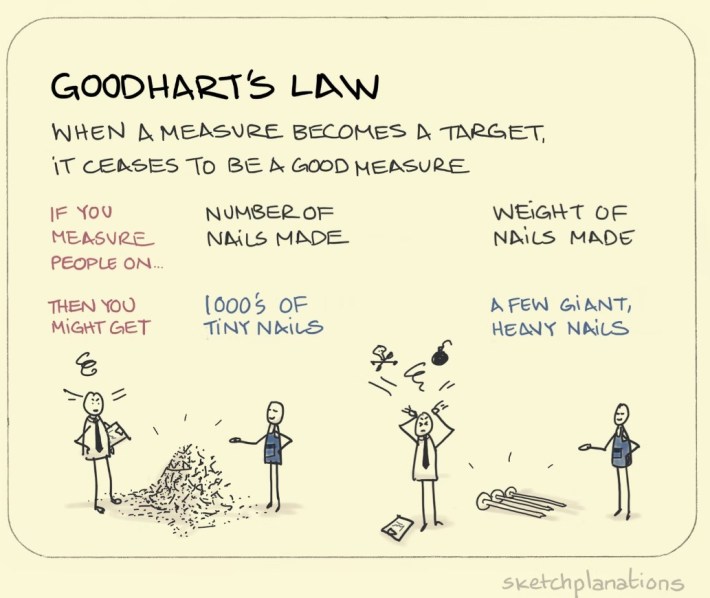 Image credit: sketchplanations
Once we open our eyes to perverse incentives or targets as measures, we recognize them everywhere.
Tests based on rote memory as targets to prove someone’s education level or school’s access to funds (better schools getting more money). Does anyone wonder how many of us spent our school years memorizing lessons for tests, quickly forgetting them so we can prepare for the next test?
Approval ratings show a politician should make short-term indulgent decisions rather than painful long-term strategies.
In cash-for-poppies programs, Afghan poppy farmers planted as many poppies as possible to get more money for destroying their crops.
Gun buyback programs, where people turned their cheap weapons and used the cash reward to buy better and more expensive guns.
The Hoy No Circula law from 1989 in Mexico City to battle extreme air pollution. Based on the last digits of the license plates, cars were not allowed on the roads on specific days. Some people did carpool or took public transportation on the days they were not allowed to drive their vehicles, which was the law’s intent. Others bought second cars with different license plates and drove those cars on the day they were not allowed to drive their regular cars. And it is no surprise that people bought the cheapest cars, producing much more polluting emissions.
And then, we have the horrifying example of Leopold II’s rule in Congo. The Belgian authorities authorized unrealistic rubber collection quotas on plantation workers. Failure to comply with quotas was punishable by death. The guards were required to show the hand of their victims as proof of killing (eerily similar to rats tails) as it was believed they would otherwise use the highly-priced imported munition from Europe to hunt or stockpile it for mutiny. But as the collection quotas were so extreme and the guards would still be paid if they provided hands instead of rubber, most forces would cut off hands instead of gathering rubber.
In many situations, incentives work. To give another historical example, consider the convicts’ transportation from England to Australia towards the end of the 18th century. Many convicts died during these transports, causing outrage to the public, as these transports were publicly funded, and people believed that exile to Australia shouldn’t be a death penalty. Then, another approach was introduced. The government decided to pay a bonus for each convict that arrived in Australia alive. Convicts’ lives suddenly became valuable, and miraculously, more passengers survived the harsh transport conditions.
The carrot and stick provide functioning societies as the threat of fines keep us in line, and incentives reward us for being good citizens. Unfortunately, atrocities happen when hunting for incentives, and humans manipulate the rules, ravaging natural, moral, or cultural ecosystems. We should become a bit nervous when we see incentives for specific measures as sometimes, we get exactly what we paid for and not what we truly needed.

“It’s sort of a morality tale for the arrogance of modernity, that we put so much faith into science and reason and using industry to solve every problem,” Vann [the historian who investigated the rats’ massacre] says. “This is the same kind of mindset that lead to World War I — the idea that the machine gun, because it kills so efficiently, is going to lead to a quick war. And what that actually lead to is a long war where many people lost their lives.”
So what does he think the lesson is instead? “To watch out for programs being created in situations where the arrogance is so strong and the power differential is so intense that evidence can be ignored.”
Atlas Obscura article about The Great Hanoi Rat Massacre