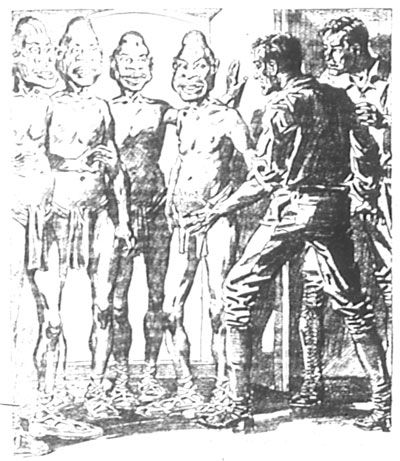 "The slaves!" gasped Jim, and involuntarily backed into the room.

The Slave Ship From Space

Twice that night the two young men had seen the thing, and their hour for turning in had long since passed as they lay half reclining on the ground by their campfire waiting, hoping that it would return once more. Their interest in the strange visitant had completely banished all sensations of fatigue from a full day of vacation fishing in the cold Adirondack streams among which they were camping for that month.

About HackerNoon Book Series: We bring you the most important technical, scientific, and insightful public domain books. This book is part of the public domain.
Various. 2010. Astounding Stories of Super-Science, July 1931. Urbana, Illinois: Project Gutenberg. Retrieved May 2022 from https://www.gutenberg.org/files/31168/31168-h/31168-h.htm#Page_5
This eBook is for the use of anyone anywhere at no cost and with almost no restrictions whatsoever. You may copy it, give it away or re-use it under the terms of the Project Gutenberg License included with this eBook or online at www.gutenberg.org, located at https://www.gutenberg.org/policy/license.html.
Source